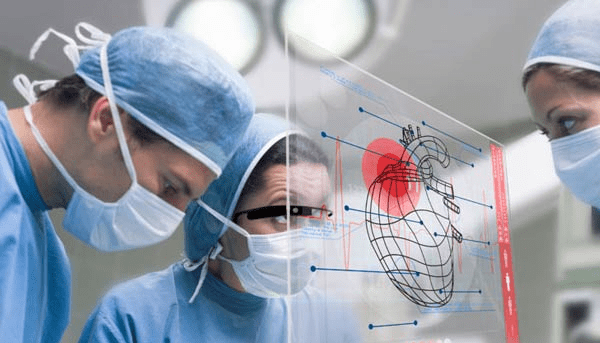 The stage was set for the modern Google Glass (now renamed Project Aura) in 1997, when Steve Mann submitted his paper called “Wearable Computing: A First Step Towards Personal Imaging.” This was the most transformation work in the space of wearables, since the 1977 electrotactile seeing aid developed by Carter Collins, shown below.

Steve Mann kicked off his future prediction in 1997 by writing that,

“Miniaturization of components has enabled systems that are wearable and nearly invisible, so that individuals can move about and interact freely, supported by their personal information domain.”

Surprisingly the miniaturization of components was not all that new.  The 2001 the book called the, “Implications of Digitizing, Miniaturization and Convergence in Media and Entertainment” covers miniaturization well. Publisher, the Center for Digital Technology and Management (CDTM) a joint interdisciplinary institution of the Munich University of Technology (TUM) and the Ludwig-Maximilians-University Munich (LMU) highlighted that,

“basic trends and models for the music market were recognized and developed.  A possible future scenario of the music industry can be created by synthesizing these points.”

A Shift from Technology to Digital Humanism

The points of data or amount of information doubles every year. Aspects of our everyday life iPhones, iPads, TV, and the like would not be possible without silicon microelectronics. The below chart illustrates the number of transistors in successive Intel Processors as a function over time.

Moore’s Law: the number of transistors in a dense integrated circuit doubles approximately every two years.

We now know the effect of technology innovation on the ideation of digital humanism, helped true thought leaders emerge, who have helped form today’s digital experience. Let’s travel to 1997 and step forward with Steve as he explores and challenges the definition of ‘impossible.’

To immerse yourself in the era allow me to help accelerate the journey with color.  The year is 1997: Bill Clinton was inaugurated for his second term, Morgan Stanley and Dean Witter Reynolds investment banks announce a $10 billion merger, Clinton bands funding for human cloning, Steve Jobs returns to Apple Computer, Inc. at Macworld in Boston, the first color photograph appears on the front page of The New York Times, Broadband cable starts to enter the home market and you’re watching all of this on your PC running a 486 dx2 80 MHz with 16 MB RAM and a 300 MB hard drive (if you’re lucky).

The Heart of Wearables

The heart of computer adoption and later wearable miniaturization revolve around the advancements made in the microchip and more specifically the Fairchild semiconductor.  Christophe Lécuyer and David Brock in their history of the microchip, published in 2010 by the MIT Press, “Makers of the Microchip: A Documentary History of Fairchild Semiconductor” detail the great advancements in this space over the last 75 years.

“Silicon may be considered as the information carrier of our times. In the history of information there were two revolutions (approximately 500 years apart). The first was that of Johan Gutenberg who made information available to many, the other is the invention of the transistor (Lukasiak, & Jakubowski, 2010)”

Advancements in humanism and the integration of technology was only possible because of exponential increases in capacities of silicon integrated circuits opening a new world for human interaction and modern digitization.

Mann believed the future could be better.  The Pentium II and the Intel 6th generation microarchitecture was launched in May of 1997, just three months after Steve’s paper was submitted.  Until that point the Pentium Pro was the leader which made its debut in November of 1995. But Mann had broader vision which he articulated in the first page of his paper.

“With the screen moved off the lap and up to the eyes, you can simultaneously talk to someone and take notes without breaking eye contact. Miniaturized into an otherwise normal pair of eyeglasses, such an apparatus is unobtrusive and useful in business meetings and social situations (Mann, 1997).”

The similarity between Mann’s MannGlas invention and the gen 1 GoogleGlass is remarkable.

Two years after Google released the Mirror API (allowing developers to start making apps for Glass), there are still no ads permitted in these apps. This open API architecture has grown as apps from facial recognition, translation, photo manipulation, to social networks all enhance the network effect, putting new products faster into curious consumer hands.

TV show ‘Royal Pains’ goes mobile with health concierge care services! Innovative companies like Pager (NYC dispatches doctors or nurses via Uber), Heal (Los Angeles commits to getting a doc to your sofa in under an hour for $99-the med assistant drives and parks), MedZed (nurses go to patient homes, and connects with doctors via laptop) Medicast (Palo Alto, use a platform for providers to conduct virtual house calls) and Curbside Care (Philadelphia, focuses on bringing back the old with ‘family doctor house calls’), UberHealth (NYC, extends the classic ride service Uber with an extra option for health services) all offer concierge services; they bring healthcare to your home.

Go2Nurse, founded by Meg Kukiak is extending care in Illinois providing case managers in Medicare, Medicaid and ACA-created healthcare organizations. These private duty nurses provide pre-natal and post-natal care, wound care, pain management, physical therapy, medication and disease education. Language technology makes every nurse bi-lingual, a technology developed based on the Google Translate API (application programming interface: connecting the physical with the virtual). Also, RetraceHealth, out of Minneapolis, partners nurse practitioner with patients for consults via video ($50) and only sends nurses to a patient home if hand-on care is required (like drawing blood).

Voice Activation from “record a video” to “Hangout with [person]” each can be started by a tap on the touchpad or saying “O.K., Glass…” Well, that is great, cool and basically interesting, but where is the business application?

Sticking with healthcare, we all have heard of the EHR (electronic health record, a longitudinal electronic record of patient health information generated by one of episodes of care), and the EMR (the digital version of a paper chart in a clinician’s office with medical and treatment history for one practice and PHR (personal health record, where health and information data are maintained by the patient) unlike EMR typically owned by a hospital or provider. What is the next step in patient health.

Welcome to the WHR (wearable health record), a medical record that travels with you.

From Google Glass to Fitbit to your iPhone it’s clear that the experience of healthcare is changing.  The doctors of tomorrow will be using wearables to recall medical histories, provide real-time notifications of test results while speaking with the doctors or during surgery. Whether on the wrist, face or chest real-time information is a reality today and will be even more advanced for tomorrow.  Wearable technology allows doctors a hands free environment, to think about you instead of other interactions (writing charts, or slowly looking up patient history). Doctors can step into your medical record hands free, within seconds.

Let’s combine the idea of wearables like Google Glass with precise geo-location technology and Bluetooth LE.  Tomorrow when you walk into a doctors office your chart will automatically flip up (like happens now when you walk by a Sephora or Starbucks) on the doctors Google Glass or pop onto the touch screen on the office wall.   Your medical record will be available through the glass and can be moved, with simple voice commands, onto the flat-screen.

Who’s out there among us today, discovering what we’ll be talking about in 10 years?  One area that will be critical are API (application programming interface), the API specifies how software components should interact. APIs are the link (think integration) between the physical and virtual world. Translating this to wearables, cutting edge APIs are redefining how digital and human interaction occurs.  A handful of the top healthcare wearable APIs include: BOX API, HUMAN API, FHIR Argonaut API Standard, Betterdoctor API, Doximity API,Apple Healthkit API and SDK.  These are being used today!

Mann is the “father of wearable computing”, having created the gen 1 wearable computer in the early 1980’s.  As is evident below, Google Glass didn’t just appear, it evolved.  It’s reasonable to conclude that the technologies of tomorrow also won’t just appear, but will evolve from an idea someone has been playing with and tinkering with for years.

I look forward to exploring the possibilities of tomorrow with you: Measuring and visualizing the invisible. It all starts with believing a better tomorrow is possible!

Lukasiak, L., & Jakubowski, A. (2010). History of Semiconductors. Journal of Telecommunications and Information Technology.

Whitworth, B., & Ahmad, A. (2014). The Social Design of Technical Systems: Building technologies for communities 2nd Edition. The Interaction Design Foundation.