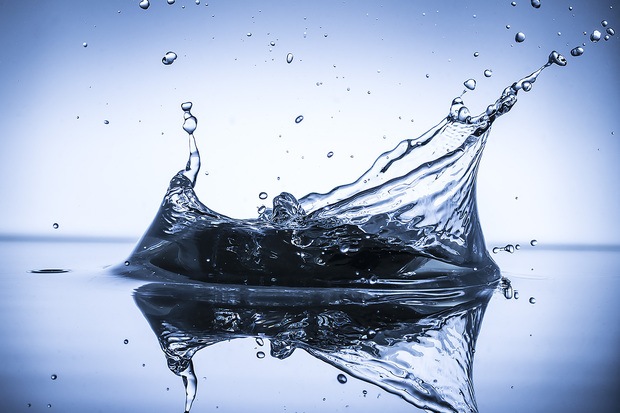 To absorb the massive virality and impact of blockchain, we must first address the hype. Hype, please square up.

The premise that blockchain is hype is false.

What is hype? The Oxford Dictionary defines hype as, “promoting or publicizing (a product or idea) intensively, often exaggerating its importance or benefits.” The simple version, the hype is an exaggerated advantage. A benefit that doesn’t align to the future reality of the product or service. As with many new technologies, there is excitement. However, the buzz and excitement around blockchain are more than hype; it’s the realization for the potential to transform industries.

Thought leaders from Forbes and Harvard Business Review have bought into the value of blockchain technologies. For example, Jerry Cuomo, an IBM Fellow and Forbes contributor in his February 2016 Forbes article, “Blockchain: The Foundation For The Future Of Transactions,” stated that “Blockchain has the potential to become the technological foundation for all electronic transactions conducted over the Internet.” Amy Webb, in her January 2015 Harvard Business Review article titled, “The Tech Trends You Can’t Ignore In 2015” stated, “Even if Bitcoin itself never really gains traction, blockchain technology has enormous promise.”

It’s great that the media has received the mailer on the value of blockchain, but what about the industry? CISCO recently stated, “The next generation of the Internet is coming with Blockchain.” In February, Accenture launched a blockchain practice for financial services industry and entered into a partnership with announced a blockchain partnerships with Accenture, Broadridge & PwC showcasing that the “New practice will implement emerging technology that is projected to reduce financial services industry costs by more than $20 billion annually by 2021.” PwC on April 4, 2016, announced they have started a new global technology team to tap into the blockchain and have recruited 15 new leading technology and business specialists.

Deloitte has anticipated the tipping point of blockchain would not be until 2027. In a recent report titled, “Blockchain. Enigma. Paradox. Opportunity” Deloitte says that “Ultimately, the blockchain is not just about cryptocurrencies and faster peer-to-peer payments.” On October 2015, Deloitte partnered with Colu, to bring the startup into new global markets. Colu allows users to issue and track their digital assets on its platform.

The industry is unifying and joining the blockchain revolution. R3 (R3CEV LLC) leads a consortium consisting of 43 financial companies (including Microsoft as of April 4, 2016) in the research and development of blockchain usage in the financial system. However, the fabric R3 is proposing is industry agnostic. Todd McDonald, the co-founder and head of strategy for R3, likely wouldn’t refer to blockchain as hype either. The industry has taken notice of blockchain.

The fact that in 2015, large investors invested over 1 billion into the blockchain technology doesn’t persuade some colonialists. Remember the hype over the telegraph in the nineteenth century? The telephone has matured but hype? We all know how overstated the telephone was by the end of the nineteenth and start of the twentieth centuries. How about the buzz and overpromises of canals and railroads in the 1700’s and 1800’s? Hype probably isn’t the best word to describe the development of railroads that was one of the most important phenomena of the Industrial Revolution. The list doesn’t seem to end and continues with the likes of automobiles, radios and then the jet engine, rockets and atomic energy into the 1950’ and 1960’s with biotechnology, nanotechnology, and genomics. Do we consider the canals, railroads, telegraphs, automobiles and cell phones hype? If these hyped technologies landed us here, imagine how blockchain can change society in the future.

The Gartner Hype Cycle, introduced in 1995 offers useful insights into the promise of emerging technology. The July 2015, Gartner Hype Cycle for Emerging Technologies report, highlighted the phases of the hype cycle on emerging and collaborative tech. The five phases of the Hype Cycle include: innovation trigger (less than 2 years), peak of inflated expectations (2 to 5 years), trough of disillusionment (5 to 10 years), slope of enlightenment (more than a decade), and lastly the plateau of productivity (obsolesce is reached before the plateau). It could be argued that the Hype Cycle is not a cycle and that outcomes do not depend on the nature of the technology itself or that it’s less than scientific in nature without accounting for changes over time in the speed at which technology develops. However, it does effectively show how society feels about new technology and when historically inflated expectations and disenchantments should likely occur.

If we consider blockchain’s innovation trigger phase started in 2014, based on when serious investors began to weigh in, the phases of the blockchain hype cycle would be the following: innovation trigger (2014-2015), peak of inflated expectations (2016 to 2020), trough of disillusionment (2021 to 2030), slope of enlightenment (beginning 2030), and lastly the plateau of productivity (if applicable, after 2030). The below charts illustrate the phases of the Hype Cycle showing visibility over time and expectations over time. If you’re looking for additional sources on the Hype Cycle Jackie Fenn and Mark Raskino, have an excellent book titled, “Mastering the Hype Cycle: how to Choose the Right Innovation at the Right Time.” 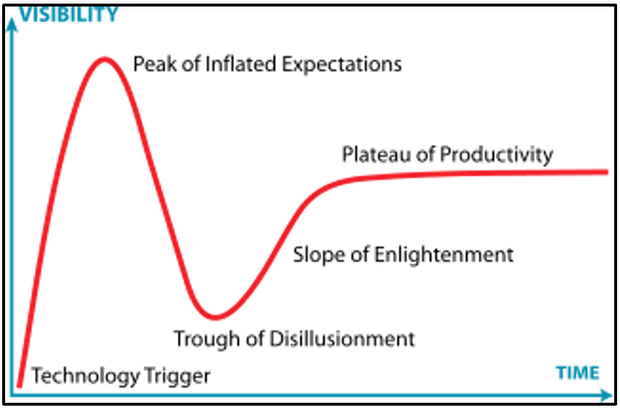 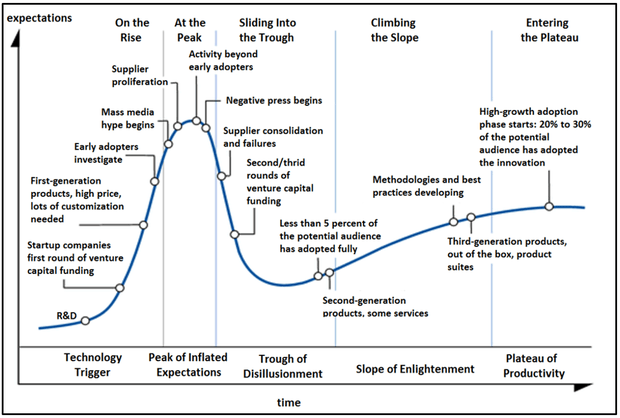 The paper, Bitcoin: A Peer-to-Peer Electronic Cash System, by the individual or group called Satoshi Nakamoto, was released in 2008. If this is the only framework used to evaluate blockchain, that would be a narrow view of blockchain’s potential. Minimizing the value of blockchain would be akin to stating in 1995 that the Internet would be used just for email.

Blockchain is much more than cryptocurrency, and the benefits of blockchain will extend well beyond the financial markets. For example, healthcare is ripe for disruption and applications may include: